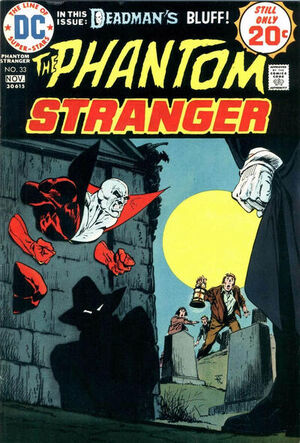 When Lou Ubric, owner of Ubric Investment Corp. and secretly a crime boss, goes to see his Doctor, Dr. Zorn, Zorn uses his powers of manipulation to motivate his own agenda. Reviewing Ubric's patient tapes, he learns of his involvement in the murder of Boston Brand. Now knowing of the existence of Deadman, Zorn uses his mental powers to call Phantom Stranger. He records a conversation with the Stranger, and later edits the tape so, that the Stranger sounds as though he is confessing to the murder of Boston Brand.

When Deadman arrives, he possesses Zorn and plays the tape. When the Stranger hears his own false confession, he tries to fight Zorn, but soon learns that Deadman is in control of Zorn's body. Deadman learns that the information about his murder came from Ubric originally, and so Deadman goes after him. He possesses Ubric's body during a meeting with some other crime bosses in the hopes of learning the identity of his murderer. However, when an FBI agent is caught spying and is about to be executed, the Phantom Stranger talks Deadman into sacrificing Ubric's life to save the agent.

Furious at having to sacrifice his best lead in finding out who his murderer is, Deadman storms off. The Stranger leaves as well just as the FBI agent knocks out the crooks. Left alone, the agent wonders what exactly happened and who the Phantom Stranger was talking to.

Retrieved from "https://heykidscomics.fandom.com/wiki/Phantom_Stranger_Vol_2_33?oldid=1445483"
Community content is available under CC-BY-SA unless otherwise noted.