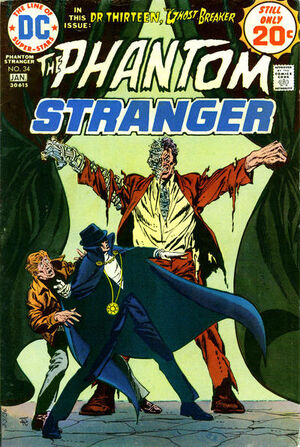 Appearing in "A Death in the Family!"Edit

Synopsis for "A Death in the Family!"Edit

Following the funeral of Alonzo Barda, a crime boss who was murdered by the Nero Mob, his brother Charlie is uneasy about taking over his brothers business. With the aid of the Phantom Stranger, Charlie learns that his friend Enrico murdered Alonzo and kept his brain alive and connected to a computer to learn how to run the mob and put a robot of Alonzo in place when Charlie refused to get involved in the criminal enterprises of his brother. Discovering the secret and seeing Alonzo's pleas for an end, Charlie sacrifices his life to destroy the computer which has been keeping his brothers brain alive.

Appearing in "...And the Dog Howls through the Night!"Edit

Synopsis for "...And the Dog Howls through the Night!"Edit

When called in to investigate a haunting, Dr. Thirteen and his wife Marie witness what appears to be a ghost who suddenly appears pleading for help before disappearing. Learning that the owner of the haunted house had mysteriously disappeared, Dr. Thirteen learns that he was a scientist working on an experiment.

Retrieved from "https://heykidscomics.fandom.com/wiki/Phantom_Stranger_Vol_2_34?oldid=1445484"
Community content is available under CC-BY-SA unless otherwise noted.