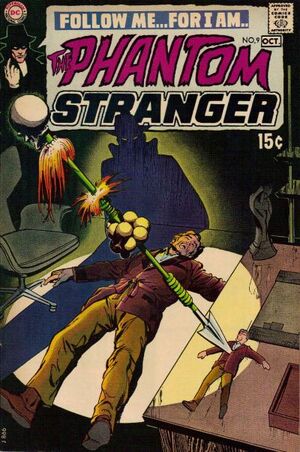 Are you sure, Dr. Thirteen? Is there no life after death? Does the struggle of good evil cease when a man dies?

While on vacation in a Haitian country, Dr. Thirteen is called by the president who believes that local practitioners of voodoo are targeting him to scare people into worshiping their religion. Thirteen relates to a similar case he was involved with that had to do with Voodoo, and how he debunked it as a hoax.

Along the way to confront the Papaloi of the Voodoo worshipers, Dr. Thirteen spots Mr. Square, Wild Rose, Spartacus and Attila. He suspects that the Phantom Stranger is going to interfere because of their presence and questions them about the whereabouts of the Stranger. However when he returns to the President's car, they find that the Stranger is in the vehicle and has convinced the President to allow him to accompany them.

Arriving at the Papaloi's castle, they find that Tala is once more involved, Phantom Stranger battles both the Papaloi and Tala. Smashing the Papaloi, and capturing it's true form (a spider) in jar containing the Seal of Solomon and throwing it into the ocean. When he tries to apprehend Tala, she disappears. Phantom Stranger leaves as well, with Dr. Thirteen cursing him once more for his interference and vowing that he will one day reveal the Stranger as a hoax.

Appearing in "The Walking Stick"Edit

Synopsis for "The Walking Stick"Edit

This story is reprinted from House of Mystery #24.

Retrieved from "https://heykidscomics.fandom.com/wiki/Phantom_Stranger_Vol_2_9?oldid=1445459"
Community content is available under CC-BY-SA unless otherwise noted.