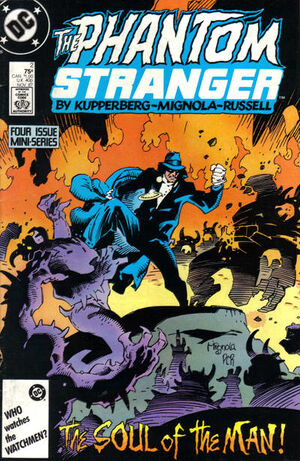 We are linked, from now until the very end of creation! Which, incidentally, should occur any day now!

Appearing in "The Soul of the Man"Edit

Synopsis for "The Soul of the Man"Edit

The Phantom Stranger and Bruce Gordon meet with Jenet Klyburn and head towards one of the geological hot spots – Mount Saint Helens. They know that the volcano is readying itself to blow again soon. Gordon begins creating a large laser rifle designed to punch through the base of the volcano and release the increasing pressure. Jenet continues to take tests. The Phantom Stranger, realizing that there is more to this than meets the eye, uses simple Earth magic to enter the mouth of the volcano.

Deep inside Mount Saint Helens, the Phantom Stranger encounters a gigantic demon. The demon begins attacking him, and the Stranger is forced to avoid his advances. Jenet Klyburn rappels deep into the volcano and uses Dr. Gordon's laser rifle to destroy the demon. Once again, the Phantom Stranger finds himself helpless before a Satanic power, having to rely on mere humans to fight his battles for him.

Meanwhile, Jimmy Olsen of the Daily Planet begins investigating strange crimes involving the Russian mobs and the Russian consulate. He meets with a contact who tells him that there are dark things brewing in the Kremlin.

Retrieved from "https://heykidscomics.fandom.com/wiki/Phantom_Stranger_Vol_3_2?oldid=1445494"
Community content is available under CC-BY-SA unless otherwise noted.