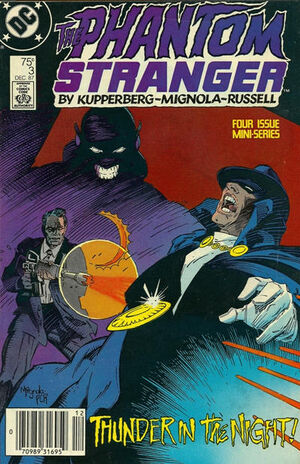 For what need have I of mere mortal assistance whilst I possess the power bestowed upon me by the Lords of Order!

Appearing in "Thunder in the Night!"Edit

Synopsis for "Thunder in the Night!"Edit

Bruce Gordon has invited the now human Phantom Stranger to stay at his apartment. As the Stranger gets used to inherent human frailties, he warns Gordon that Eclipso's master plot is for the world powers to plunge the Earth into eternal darkness with nuclear war.

Later, Jimmy Olsen continues investigating a Russian mobster's connection to the Soviet consulate. He finds that the mobster's contact is actually a demon in league with Eclipso. The demon discovers Jimmy tailing him and tries to kill him. The Phantom Stranger arrives and distracts the demon long enough for Jimmy to knock it out with an aluminum trashcan.

Later, they learn that Eclipso intends on supplanting a doppelgänger demon for the President of the United States, in order to instigate World War III. The Stranger, Bruce Gordon and Jimmy Olsen rush from Metropolis to Washington in an effort to warn the White House, but they are too late. The Doppelgänger replaces President Reagan and leaves the real President outside the front gates of the White House. The Doppelganger elevates the nuclear threat to Def-Con 1 and prepares to launch nuclear weapons at the Soviet Union.

Jimmy Olsen, the Phantom Stranger and Bruce Gordon recover the real president and fight through two demons to get him back inside the White House. Storming the war room, the Phantom Stranger attacks the doppelgänger. He eventually renders him unconscious and the real President is back in place before the missiles can be launched.

Retrieved from "https://heykidscomics.fandom.com/wiki/Phantom_Stranger_Vol_3_3?oldid=1445495"
Community content is available under CC-BY-SA unless otherwise noted.