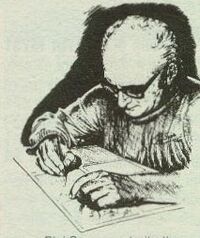 Pini Segna was born in Florence in 1925. His first name was Segna but he signed himself and is known as Pini Segna, as though Segna were his last name.

He was known to readers especially for having been a part of the Zagor art staff, a series he worked on from 1977 to 1982.

In fandom circles he was known, for a brief time, for the Premio Pini Segna award named after him. The award was given to creators who self-published, as he had done in the past, being one of the precursors of self-publishing comic book creators.

Retrieved from "https://heykidscomics.fandom.com/wiki/Pini_Segna?oldid=143337"
Community content is available under CC-BY-SA unless otherwise noted.