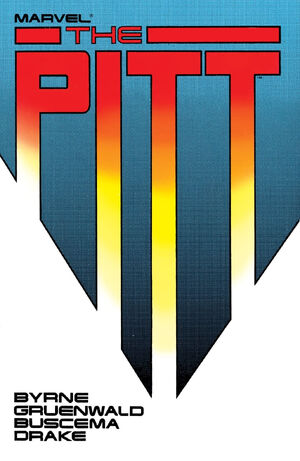 Pittsburgh is gone. Completely. This face must be understood absolutely. The city was within a sphere of earth and atmosphere measuring fifty miles in diameter which was completely covered in the strange, inert material now at the bottom of the crater -- the Pitt, as I've heard it ghoulishly referred to.

December 22, 1987, at 4:10 PM EST, the Witness comes to feel a strange, horrific pull and, feeling the need to examine it, races towards the source. Nearly two hours pass before he reaches his destination - Pittsburgh, Pennsylvania. As he does, he passes by an arguing family. Reaching the city, he discovers the source - Ken Connell. He tries to stop him from slamming his hand (bearing the mark of the Star Brand) on a dumbbell.

However, at 6:06 PM, he fails. The massive winds caused by the explosion carry Ken away. The Witness decides that trying to save Ken at this point in worthless and decides to investigate the results, watching as the vortex created by the explosion rips just about everything in and around the area into the hole. At 6:08, the winds reach in and rip the car holding the family 16 miles away off the road. At 6:16, the winds die out.

At 6:17, a soldier in Griffis Air Force Base, New York, is the first to notice the strange change on radar, realizing Pittsburgh was turned into a 50 mile crater, forcing the call to the Chief of Staff. At 6:47, people at Lincoln Crescent, Washington D.C. have just noticed the strange explosion are at a loss for words. At 6:51, soldiers come to pick up MacIntyre Browning to assess the situation, much to his displeasure.

By 9:01, Browning is on a jet, exploring the site the best he can. He attempts to raise someone in the city, but gets nothing. However, the winds are too much for the jet and he is forced to pull back and calls in Jenny Swensen to explore. With Browning giving her orders, Jenny and the Spitfire armor dives into the crater at 10:02. At 10:06, the Witness appears to find Pittsburgh, only to find the people there noticing him and attempting to attack him, blaming him for what happened.

At 10:11, Browning leads a group of soldiers into the perimeter, though they grumble over being forced to clean the mess. Instead, Browning tells the clean up crew to back off using his security clearance to issue it. He sets up a security perimeter around the area, telling that no civilian can go further. When one of the soldiers tell him that martial law really hasn't been established because of war, Browning gets him to see that this is a whole new ballgame. At 10:13, Jenny loses contact with Jake and dives deeper into the crater with no voice. By 11:02, she finds herself fifteen miles below sea level before she reaches the bottom. Diving into the water, Jenny goes for some samples when she discovers the car holding the family. She rescues them and goes to pull them out. However, she discovers the liquid is seeping into the suit and the weight of the car was slowing them down.

12:01 AM, December 23, 1987, Jenny surfaces from the water with the car. However, at 12:18, she's forced to make a decision: risk damaging her suit or leave the family to die. Taking a risk, she's able to save the family and, by 1:04 AM, pulls them out of the crater. At 1:29, Jenny confronts Browning and learns of what's inside the crater. He, then, orders the area sealed and, at 1:43 AM, gets confirmation to do whatever it took to make sure no one learns of this. Outside the perimeter, a news chopper discovers the crater and is told to leave. However, the copter refuses to and the army chopper is forced to destroy it to keep the secret. Jenny begs for them to be spared, but it's too late.

At 2:00 AM, the Witness finally pulls away from his attackers, only to find out they weren't real - it was his imagination magnifying the guilt of being unable to save them. At 3:18 AM, Browning confronts Jenny and she's able to show him a composite image of what the area is at the moment. While Browning wants Jenny to make more scans of the area, Jenny wants to go in and try to find more survivors. When Browning forbids it, Jenny disobeys orders and races out with the Spitfire suit, going AWOL. At 4:21, the Witness realizes that he had been driven insane by what he had seen, unable to cope for awhile. Jenny spots the Witness, but both of them dismiss it as hallucinations.

At 4:57, Browning contemplates what he should be doing, though he comes to find out the situation has gotten worse, the Russians have revealed the incident to the rest of the world in an attempt to prove they had nothing to do with it. When Browning is told they have Spitfire in their sights, Browning tells him to let her go. At 6:06 AM, 12 hours after the incident, Browning realizes he had been right in that they were dealing with a new ballgame

Retrieved from "https://heykidscomics.fandom.com/wiki/Pitt_Vol_1_1?oldid=1474976"
Community content is available under CC-BY-SA unless otherwise noted.