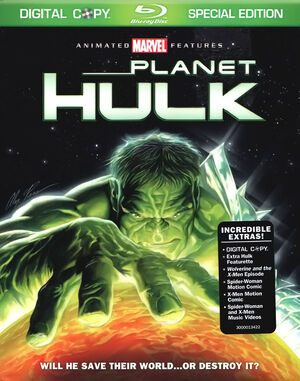 Will he save their world...or destroy it?

He was a monster, impossible to control, too dangerous to ignore. So Earth's mightiest heroes exiled him into outer space.

But now the Incredible Hulk crash-lands on the distant planet Sakaar, ruled by the tyrannical Red King. Sold into slavery, the Hulk becomes the planet's mightiest gladiator - but his new masters get more than they bargained for when he forges a bond of brotherhood with his fellow fighters.

Unlike Earth, the desperate people of Sakaar believe a monster is just what they need. But will the Hulk be the one to save their world...or destroy it?

Retrieved from "https://heykidscomics.fandom.com/wiki/Planet_Hulk_(film)?oldid=1537965"
Community content is available under CC-BY-SA unless otherwise noted.