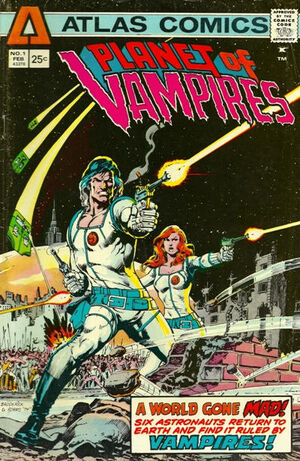 Template:Atlas ArchivesApril 21st, 2010. The crew of the Mars probe Aries VII returns home after a 5 year voyage. They will return to an earth far different from when they first left.

After a successful water landing outside of Coney Island, the astronauts are attacked by a group of savages. One of the astronauts is killed. Before the savages can inflict further damage, a small floating aircraft appears laying waste to the savages. The astronaut crew is taken to a huge dome. With the Empire State Building as it's axis, it stands 1100 feet tall with 5 interior levels. The dome is designed to keep the savages out. To the savages, the inhabitants of the Dome are known as Domies.

The crew is soon introduced to the Proctor, the Dome Administrator. Captain Chris Galland recounts how the Aries VII first lost contact with Earth. The last message that they received from Mission Control is that war had been declared between the major powers. The crew assumed the worst, that controlled nuclear war was raging across the face of the earth. The astronauts decided to continue to orbit Mars, hoping to hear something from earth. Soon, critical limitations of life support forced them to return to earth.

After their meeting with the Proctor, the astronauts are taken to their quarters. On the way, they encounter a savage being taken to an "Indoctrination Facility". Screams of terror cause them to investigate the facility. To their horror, they find an assembly line for extracting bodily fluids from humans. The People of the Dome are mechanized vampires. Freeing what savages they can, they destroy the facility. The astronaut crew is led to freedom by Bruiser Culhane, Warlord of the Bay Ridge assassins.

Shortly after escaping the Dome, Bruiser and the astronauts are confronted by Bad Lenny Siegle of the Myrtle Street Boys. The two gang leaders will fight to the death with the fate of the astronauts hanging in the balance.

Planet of the Vampires @ The Atlas Archive

Retrieved from "https://heykidscomics.fandom.com/wiki/Planet_of_Vampires_Vol_1_1?oldid=1625147"
Community content is available under CC-BY-SA unless otherwise noted.