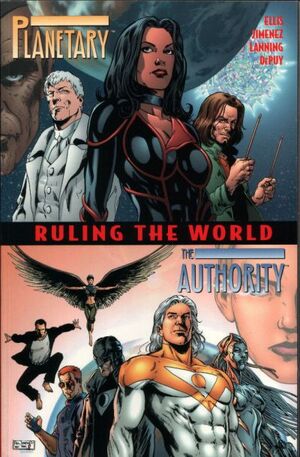 Like I said; the Authority may be our ruling power. The more we know about them, the less chance there is of them turning out like that: obsessed with ruling worlds.

Appearing in "Ruling the World"Edit

Synopsis for "Ruling the World"Edit

A giant, octopus-like creature, accompanied by various toothy flying fish creatures, has turned the town of Judgement, Rhode Island into a war zone, and judging by Elijah Snow's tirade, The Drummer is somehow responsible. As Planetary leaves the scene, The Authority, self-proclaimed protectors of Earth, successfully clean up the mess. Snow's critical assessment is accurate, for he'd encountered the mysterious eggs (one of which spawned the mammoth beast) back in 1931, when a novelist inadvertently discovered a portal into The Bleed -- the space between universes.

While the Authority is making the Bleed connection, and tying one of the eggs (hatched by human touch) to an energy signature in the Adirondacks they'd monitored previously, Snow is dismayed to learn that his teammates have turned their attention to The Authority itself. Indeed, they intend to break onto their 50-mile long ship, The Carrier, to access the vast informational archive stored there. Teleporting on, they are collecting data when they receive word that the Adirondacks base containing Doc Brass's super-computer has been compromised. A psychotic who learned about the Bleed via the aforementioned novelist has infiltrated Planetary intending to use the computer to kill the world.

The Authority, monitoring the situation themselves, also responds, and both teams arrive on the scene simultaneously. Outside the base, Jenny Sparks' team encounters an ever-growing army of killer robots; inside, Planetary finds their team (and the madman who killed them) dead and the computer Brass guarded for 50 years operating -- and opening a doorway to marauders from another universe, including a demonic, alternate-reality version of the Authority itself. Working independently, the teams overcome the invading force and shut down the computer, leaving each group conscious that future battles are yet to come.