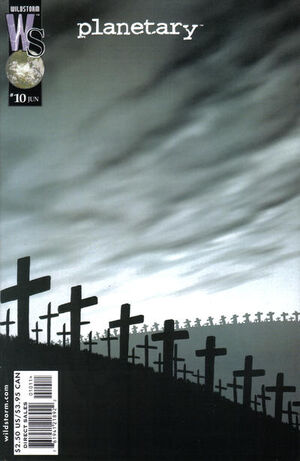 Appearing in "Magic and Loss"Edit

Synopsis for "Magic and Loss"Edit

A billowing red cape. An oddly shaped blue lantern. A pair of golden bracelets. These objects are a complete mystery to the Planetary personnel who discover them while digging through the abandoned New York laboratory of the sinister group known as The Four. But behind each seemingly innocuous object lies a story, and a tragedy.

In one, an alien couple gazes out upon their technologically advanced world, while one tells the other that each exploratory probe the planet launches brings their doom that much closer, their manipulation of gravity increasing the instability of the black hole at planet core. Helpless to prevent the coming tragedy, the couple hopes to survive it, in a sense, by launching their own vessel, which will carry every aspect of their culture to a distant planet, actualized in the form of a child. They embrace, the craft launches, and ironically enough, that act is the trigger for their world's destruction.

This end, and the escaping craft, are witnessed by another ancient race, which laments the loss, but finds its own resolve to help prevent such tragedies strengthened. This strange race, evolved from "space's first policeman," empowers individuals across the universe with a glowing blue talisman, a lantern that shines the light of reason on countless worlds. Bestowing this lantern on a noble figure, they tell him to "be the light in blackest night," and send him out among the stars.

This trajectory, too, has witnesses: a mother and daughter standing at the gates of a gleaming city on earth, gazing out over an America that is both unaware of their secret female society, and nowhere near as advanced as them. Still, says the elder, the time is right for the island city to reveal itself; "to bring them news of a better way to live." And her daughter - empowered by her wondrous, magical bracelets - shall be the ambassador that changes the world.

When the alien vessel lands on Earth, a team led by William Leather is there to greet it. Its tiny occupant, a wide-eyed baby wrapped in a red cape, extends a beseeching hand to Leather, who incinerates him. Leather phones the encounter into Randall Dowling, who is in the process of surgically removing a lantern from the corpse of the alien protector seen in the second story after having shot it down near Jupiter, and is admonished by Dowling for killing the baby rather than capturing him. As the two chat, Dowling offhandedly tells Leather of his discovery of a secret culture of women, and his intention to have their ambassador assassinated by Kim Süskind by way of orbital laser as she emerges from the island, noting "[That] should send the correct message".

Back in the present, Elijah Snow looks at the objects, and seems to perceive the great loss behind each of them. And he comes to a realization, which he voices to the uncomprehending Planetary crew: "I've been going about this all wrong." He leaves, saying he needs to find John Stone.

Retrieved from "https://heykidscomics.fandom.com/wiki/Planetary_Vol_1_10?oldid=1445515"
Community content is available under CC-BY-SA unless otherwise noted.