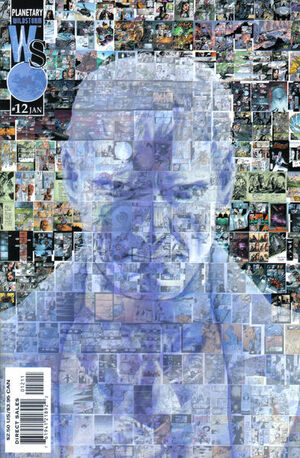 Elijah Snow calls a meeting of the Planetary field team, despite the protests of both Jakita Wagner and The Drummer. Snow's cold demeanor silences them. He tells them that his memory, the gaps in which he has been worried about since encountering William Leather in, is coming back to him. Telling Jakita he's aware he knew her before she found him in the diner in, he queries The Drummer, threateningly, as to what a Planetary guide is. Told it's been published underground annually since 1925, he asks (although it's clear he already knows the answer), "And who writes it?" "You do," responds The Drummer. Conveying his displeasure by shattering his desk, Snow extracts from Jakita that he in fact created the Planetary guide himself. Hinting at recollection of a closer relationship with Jakita, he announces his knowledge of Sherlock Holmes, by whom Snow apparently was trained to be a detective. Striding abruptly from the room, with Jakita and The Drummer in pursuit, Snow leaves the Manhattan offices and enters Central Park, continuing to talk -- of the need to open a file on John Stone, who he suspects played a factor in his restored memories; and of the intriguing fact that the Hark Corporation must have intentionally exposed the shiftship that they "discovered". And then Snow reveals his key recovered memory: "I'm The Fourth Man."

When Snow reprimands Jakita for tracking him down, Jakita laments that they were tired of waiting for his return. The mention of Ambrose Chase jogs Snow's memory further, and as he struggles to come to grips with Chase's death, Jakita yells "You weren't supposed to remember!" At which point it comes out that The Four's Randall Dowling had threatened to kill Snow's Planetary team unless he submitted to surgically implanted memory blocks several years previously. Jakita and the Drummer attempted to get "the old Elijah" back without dislodging the blocks, but their dissolution has now put them all in deep trouble. "No," says Snow, adding that it is Dowling and company who are in trouble. Freezing a large "4" symbol, the size of Central Park itself, into the Earth, he tells his team, "The game's afoot." In orbit, a satellite bearing the distinctive marking of The Four observes.

Retrieved from "https://heykidscomics.fandom.com/wiki/Planetary_Vol_1_12?oldid=1445517"
Community content is available under CC-BY-SA unless otherwise noted.