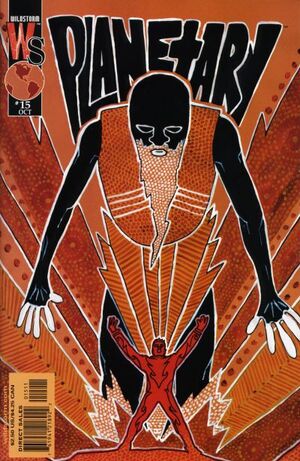 Good morning, Doctor Dowling. From here, things will only get worse.

A narrator, who we later determine to be Elijah Snow, tells a Creation story in which the First Day saw the sun explode through the dark surface of the Earth, awakening the slumbering Ancients, who then strode across the world singing it and all of its lifeforms into being. In the present, Snow and Jakita Wagner visit a modest-looking suburban home whose door is answered by a woman: Larissa Chase, widow of former Planetary third man Ambrose Chase. Snow tells her that she and her daughter, Angela, are now independently wealthy, part of his efforts to "right old wrongs." Later, he places a call to Jim Wilder, requesting information on coordinates and Anna Hark, and meets with Dr. Axel Brass. Brass apologizes for hiding the fact that they'd crossed paths before, at Jakita and The Drummer's request, and the two discuss previous encounters. Snow then brings up another topic: The Four.

Sometime later, Planetary is en route to Australia, as the local office has reported Four activity in the area of Ayres Rock. Snow knows why: In 1931, an explorer named Carlton Marvell, anxious to experience interplanetary travel, learned of a concept called The Dreamtime. Thought to be a space at the center of all things ("maybe the whole multiverse was dreamed into being"), The Dreamtime has an access point at Ayres Rock, a place where reality is thin. Marvell went through, and Snow was present at the time -- and now The Four are there too.

Planetary arrives to find a Four ship hovering above the mammoth outcropping and what looks to be an immense gun poised over it. That gun, Snow explains, likely incorporates part of the Creation Song that can open a gateway into The Dreamtime...but only Snow himself knows the rest of the song, and he has Jakita and Drums use it as a virus to disrupt The Four's plans. It works: Planetary's virus awakens the Ancient which, asleep, is Ayres Rock. Rising, it turns The Four's gun and spacecraft into scrap metal. Snow contacts and sarcastically wishes The Four's Randall Dowling a good morning, saying, "From here, things will only get worse."

Retrieved from "https://heykidscomics.fandom.com/wiki/Planetary_Vol_1_15?oldid=1445520"
Community content is available under CC-BY-SA unless otherwise noted.