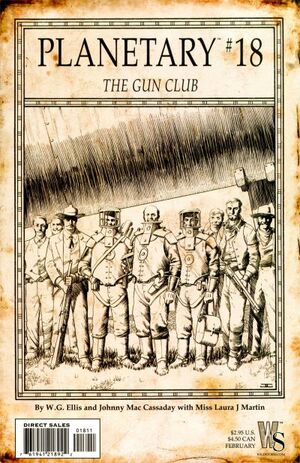 They launch a moonshot with all the available technology at their disposal. Iron and explosives. But they've no way to contact the capsule. All they can do is wait for it to come back. Days. Weeks. Some of them drift away. Months. More leave. Years pass. And they remain silent. The launch site stands empty. And I bet you that every night, every single one of them looked up at the moon and wondered. Strange world. And it's always going to be that way.

Appearing in "The Gun Club"Edit

Synopsis for "The Gun Club"Edit

Snow meets up with John Stone on a park bench in Texas. Stone clues Snow in on a space capsule orbiting Earth for more than a hundred years which will land at a certain location in a few days. He also advises Snow that William Leather will attempt to seize the capsule on the behalf of The Four. Back at HQ, The Drummer informs Snow that the space capsule was actually launched from Earth.

The capsule crashes back to Earth and Leather is first on the scene. After squabbling with Dowling, he flies off to investigate a circling helicopter. Unfortunately for him, the helicopter is rigged with explosives. It blows up as Jakita and Snow arrive in another chopper. While Leather is stunned, Jakita runs over at super speed and jams a HarkTech needle-gun into the back of his head. Incapacitated, Leather is taken away by Planetary troops.

Snow and Jakita investigate the capsule and find the skeletons of three astronauts inside. Through observation of the capsule and the surrounding area which turns out to be a abandoned 19th century launch site, Snow deduces that the capsule was fired into space using a supergun in 1851, but the astronauts had no way of knowing the ship was just traveling in the Earth's orbit thus preventing them from escaping the orbit and stuck there to die.

Retrieved from "https://heykidscomics.fandom.com/wiki/Planetary_Vol_1_18?oldid=1445523"
Community content is available under CC-BY-SA unless otherwise noted.