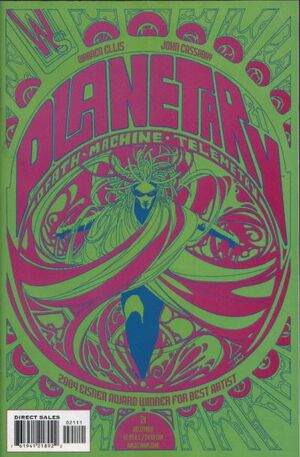 It's a strange world, Mr. Snow. Never lose sight of it.

Elijah Snow goes to see a magician (she prefers the term "scientist") he has not seen in many years, telling her The Four are now Three, and he's looking for ways to remove the rest of them from his picture. The woman, Melanchta, ignores him. She offers him a cup of tea and briefly recaps the work of a couple of noted physicists, noting how these men knew that not enough attention was being paid to the microscale.

"We contain universes," she says. While Snow focuses on The Bleed, what lies below? This segues into a history of the use of drugs by oracles and mystics throughout history, dating back to ancient times, and she then coolly informs Snow she has drugged his tea. Sensing his alarm, she explains how she is sending him on a journey into the Microverse -- the universe contained in a grain of sand. She talks him through that journey, at the end of which Snow learns he doesn't belong.

As he returns, she notes to Snow that given the wonders, and the vastness, of the universe, as well as his special place in it, surely his role is far more important than merely waging his war on The Four. Snow's face tells that he realizes she may be right.

Retrieved from "https://heykidscomics.fandom.com/wiki/Planetary_Vol_1_21?oldid=1445526"
Community content is available under CC-BY-SA unless otherwise noted.