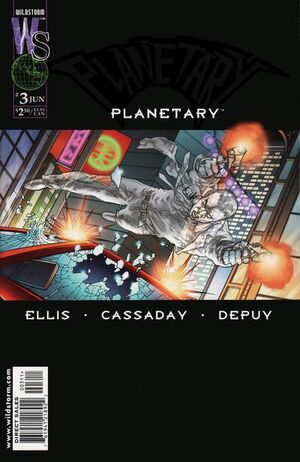 A brutal crime is carried out, but the criminals themselves are gunned down while trying to escape. Their killer and his fearfully accurate guns fade away into the night...literally. Planetary has just witnessed a true myth, as the reported sightings of the phantom cop of Hong Kong are verified. Investigating, they learn that he was, in life, Detective Shek Chi-Wai, killed in the line of duty while uncovering the criminal organization of the triads. Betrayed and murdered by his partner, Mok, he returns to exact his terrible revenge while Planetary observes. They learn that he is only the latest betrayed cop executed in Hong Kong, whose ghost has returned to take revenge, and he won't be the last. They also unearth an unimaginably huge object which The Drummer calls a large information repository -- it stores ghosts -- and Chi-Wai calls God. Completing his mission with Mok's bloody death, Chi-Wai offers Planetary only a grim message of what awaits in the afterlife: "After this, there's nothing. Do you see?" The detective has found his revenge, but it does little to bring him peace.

Retrieved from "https://heykidscomics.fandom.com/wiki/Planetary_Vol_1_3?oldid=1445508"
Community content is available under CC-BY-SA unless otherwise noted.