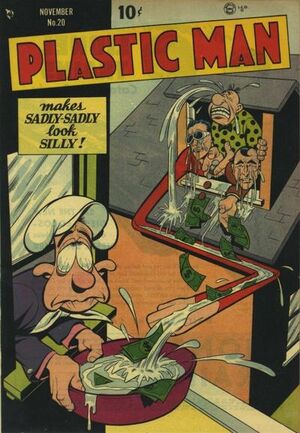 Excuse my hand on your face! I just don't want my heart broken!

While a convict is on the run, he learns how to manipulate people's emotions, causing them to pity him due to his sad-sad face and voice. People all around him stop thinking rationally and give him whatever he wants; cash, a car and jewels. Plastic Man hears of this and goes after him before he pulls another heist. When Plas confronts him, Sadly looks to the crowd for sympathy, and he gets it when they respond by attacking Plastic Man. Sadly escapes and the next day it is reported that Plastic Man died from the mad mob's mauling. At his home, Plastic Man is lying in state while mourners surround him. Sadly enters, looks at the dead hero and begins to laugh. This makes everyone angry including Plastic Man who rises from his coffin (he only pretended to be dead) and punches Sadly squarely in the mouth. So that Sadly never frowns again, Plas grabs a feather and begins to tickle his foe's feet while Woozy Winks and the chief drag him to jail.

Retrieved from "https://heykidscomics.fandom.com/wiki/Plastic_Man_Vol_1_20?oldid=744651"
Community content is available under CC-BY-SA unless otherwise noted.