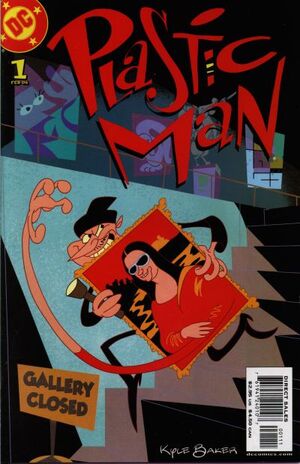 I've turned into plastic! It's a miracle! It's some kind of sign! Is it a warning? Maybe I been given super powers! Maybe I'm suppose to change my ways and fight crime!.

Plastic Man stakes out a couple of mugs by posing as a table. As they discuss their next caper, one knocks over the peper shaker, causing Plastic Man to sneeze and thus exposing him. The criminals open fire, but the bullets bounce off Plastic Man right back at them. With the help of a bowling ball and Woozy Winks, Plastic Man easily apprehends these guys and takes them to the police.

Plastic Man and Woozy then relax with a night on the town. Unfortunately, Plastic Man has a "loneliness which gnaws at [his] soul" and has nightmares that night. He dreams that he is once again Eel O'Brian, gangster! He promises his sweetheart just "one last time" and then they'll have the dough to get married. Eel and his crew slink on in to Crawford Chemical Works. Unfortunately, once they have the dough, a security guard finds them and gives chase. In the chaos, a vat of acid is knocked over and spills on Eel. He's still able to walk, but his accomplices take off without him, so walking is what he does.

He runs into a swamp and then half-way up a mountain when he succumbs to the acid in his wound - his legs feel rubbery - and he passes out.

He wakes up in Rest Haven, a mountain retreat, where a kind monk is taking care of him. The police trailed Eel there, but the monk sent them away because he senses good within Eel. Eel has an epiphany, realizing what a jerk he's been. He starts to rise out of bed and is in shock! His body has become "all gooey!" He realizes that his body has turned to plastic and that it must be some sort of sign that he is suppose to change his ways and fight crime. He contemplates his reality and future, when he suddenly awakened by a phone call.

It's the Chief. There's been a homicide and they need Agent Plastic Man to assist. Woozy, who's on the scene because he forgot where he lives, finds a clue. It's the wallet of the murderer - Eel O'Brian!

Retrieved from "https://heykidscomics.fandom.com/wiki/Plastic_Man_Vol_4_1?oldid=1445574"
Community content is available under CC-BY-SA unless otherwise noted.