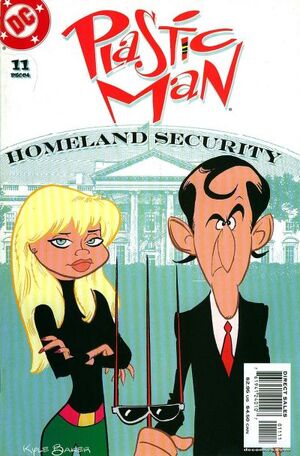 President Luthor has his scientist lackey working on a device to clone Superman. Superman knows that Lex is up to something, but can't prove it. The scientist has succeeded in creating a ray that swaps minds, but has hit a small problem with cloning Superman - the clone does everything opposite! Meanwhile, Plastic Man catches his newly-adopted daughter Edwina sneaking in after being out all night. The two get into an argument and Plas grounds her. Chief Branner calls, needing Plastic Man to go to Washington, D.C. to help the President. Not wanting to leave Edwina unsupervised, he brings her along with Agent Morgan and Chief Branner. It appears that the mind-swapping ray experiment has gone awry. Luthor's body has the brain of a frog, Bizarro has the brain of a cat, the scientist has the brain of Bizarro, and the minds of Luthor and the scientist are in the bodies of a cat and frog respectively. The secret code to activate the switch, which the scientist had not yet memorized, was written on her hand. Unfortunately, her body has ran off to places unknown. It has been decided that Plas needs to pose as the President for the impending press conference. Meanwhile, while Edwina and Woozy are running amok in the White House, the scientist (with Bizarro's brain) is climbing the Washington Monument. With a few clever shape-changes by Plastic Man, he is able to bring the body back to the lab. Unfortunately, Edwina and Woozy run into the room - crashing into the mind-swap ray - just as it is activating, causing the minds to be even more mixed-up - this time with Woozy, Morgan, Edwina, Plas, and a fly added to the mix. The President, in the body of Morgan, takes matters into her own hands. She re-arranges Plastic Man's body into Luthor's likeness and sends him off to the press conference. Unfortunately, he has the mind of Woozy Winks, so his statements are slightly less intelligent than usual...

Retrieved from "https://heykidscomics.fandom.com/wiki/Plastic_Man_Vol_4_11?oldid=1445584"
Community content is available under CC-BY-SA unless otherwise noted.