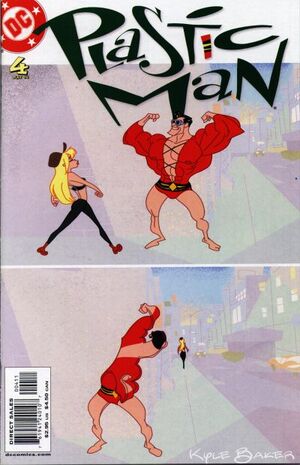 He's just some buffoon who hangs around the FBI headquarters regularly.

Having been captured by the F.B.I. as a wanted criminal, Plastic Man pops out of the body-bag that he was being transported in, bursts out of the cop-car, and slinks into the sewers where he is promptly eaten by an alligator. That doesn't slow down old Plas though, he non-nonchalantly escapes the jaws of death and moves on. Meanwhile, at FBI headquarters, Agent Morgan questions Chief Branner as to why Woozy Winks, who is not an agent, is hanging out at HQ. With no good answer, they promptly have Woozy ejected from the building. Woozy feels dejected, but the bad-guys behind framing Eel O'Brian are interested in following him. Plastic Man figures out that someone is trying to frame him - but not Plastic Man - Eel O'Brian. He goes to a seedy bar to find some of his old partners in crime to get the dirt. His ploy does not work and his old cronies give him a beat down. He does find out, however, that the news that Eel O'Brian is Plastic Man is all over town. Woozy sees a mugging and his do-gooding heart can't simply walk by. He re-dons his uniform and jumps in to stop crime as - The Trouncer! However, the mugging was planned by the mysterious villain in the shadows and they capture Woozy. A lengthy monologue outlines the villain's plans for Plastic Man. Plastic Man sneaks into FBI Headquarters to find evidence to help his case. He discovers that Woozy has been captured and is being held at Crawford Chemical Works. Plas arrives on the scene just in time to witness Woozy's foolish bravery - Woozy is sacrificing himself to set-off the villain's trap for Plastic Man!

Retrieved from "https://heykidscomics.fandom.com/wiki/Plastic_Man_Vol_4_4?oldid=1445577"
Community content is available under CC-BY-SA unless otherwise noted.