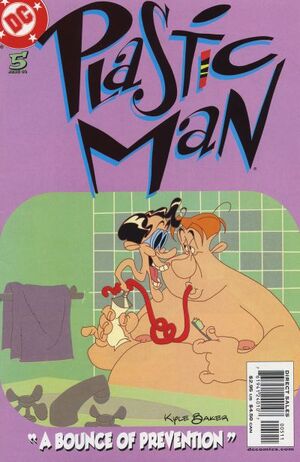 Think about this a minute. Eel O'Brian is Plastic Man. Why would he pretend to be a G-Man? Why join the Justice League? Why not just be a super-villain?

Plastic Man feels guilty about Woozy Winks sacrificing himself to save Plas. He attends Woozy funeral, in secret. Besides Woozy's mother, no one else is there until Agent Morgan shows up. She begins to suspect that Woozy's mother is not what she seems to be. Nervously, Mrs. Winks tackles Agent Morgan and a fight breaks out until Plastic Man puts a stop to it. Mrs. Winks is shot by Agent Morgan, but luckily they were just rubber bullets and she is OK. Agent Morgan and Chief Branner shift their attention to the fugitive Plastic Man and try to apprehend him. Thanks to some crafty shape-shifting and mud camouflage, Plas manages to get away. As they head back to HQ and reflect, Chief Branner starts thinking that the pieces don't add up: why would Plastic Man join the F.B.I. and the Justice League if he was just a common criminal? The two renew their investigation and retrace Plastic Man's steps on the night of the murder. Chief Branner concludes that based on testimonies and cab records, it could not have been Plastic Man that committed the murder, so now Branner focuses on the duplicate identification. He decides to retrace Plastic Man's steps at the F.B.I. headquarters and seems to be on a solid lead that it was an inside job when a poison, that was dosed in his coffee by Agent Morgan, takes affect. Plastic Man returns to Rest Haven.

Retrieved from "https://heykidscomics.fandom.com/wiki/Plastic_Man_Vol_4_5?oldid=1445578"
Community content is available under CC-BY-SA unless otherwise noted.