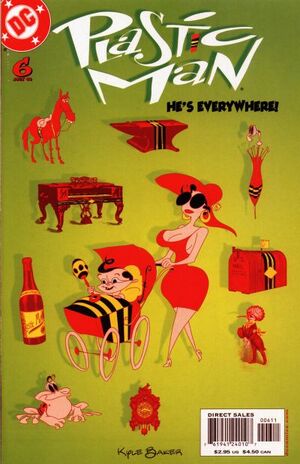 All right, you battle-happy holy rollers! This is the big one! But we can't win it bickering like babies! Victory will require teamwork! And a team needs a leader! So listen up!

Appearing in "When Strikes Agent Morgan!"Edit

Synopsis for "When Strikes Agent Morgan!"Edit

In Rest Haven, Brother Mountain, the Flaming Monk, and the Ephemeral Monk battle each other for exercise, but their noise upsets a fellow monk, Brother Eel, that is searching for peace. There is a knock at the door, and they ask Plas to hide, so that he won't be discovered. A young boy and his dog are at the door. After asking a few questions, they leave, but not before Agent Morgan spots a strange, red, plastic alter with her hidden dog-cam! She heads out with an assault team to kill Plastic Man!

As Morgan and her team roll in in helicopters and tanks, Plastic Man puts together a plan with his fellow monks. One by one, the monks dispatch the FBI Agents, with only the helicopter to deal with. Plastic Man turns into a giant blimp and combats the copters which fire nerve gas missiles at him...

Soon after, Plastic Man comes to chained up to four separate helicopters pulling him, with Agent Morgan gloating. She plants a bomb to justify her assault of the monastery, but Plas doesn't understand why she would do this. He pleads with her for an explanation.

Agent Morgan reveals that on the fateful night when gangster Eel O'Brian left, was doused with chemicals, and became Plastic Man, Eel made a promise to his girl Nancy to return. Yet, Eel never came back for her. Nancy found out that Eel was alive but never came back, so she got plastic surgery and joined the FBI under an assumed identity to kill him! Plas tells Nancy that he has always loved her and begs her to look in his wallet where he keeps a picture of her and a note. The note is for Nancy, and explains that since he is now a super-hero, he can not be with her for fear that her life would be endangered. Nancy is touched by this and agrees to release Plastic Man. However, just as she is starting to call off the 'copters, Chief Branner shows up. He faked drinking the poison that Morgan gave him and, not knowing what just transpired, starts fighting with her.

Knowing that the bomb is about to go off, gives it his all and manages to get everyone out in a giant rubber blob! Agent Morgan disables the bomb just in time. Plastic Man convinces the Chief that Morgan has changed for the good, and that no one was actually killed. The body of Jimmy Needles that was originally found was already dead when she planted it, and good old Woozy Winks suddenly shows up. He's been brought back to life by the Ephemeral Monk! The Chief realizes that no real harm has been done and welcomes Plastic Man and Agent Morgan back to the F.B.I.!

Retrieved from "https://heykidscomics.fandom.com/wiki/Plastic_Man_Vol_4_6?oldid=1445579"
Community content is available under CC-BY-SA unless otherwise noted.