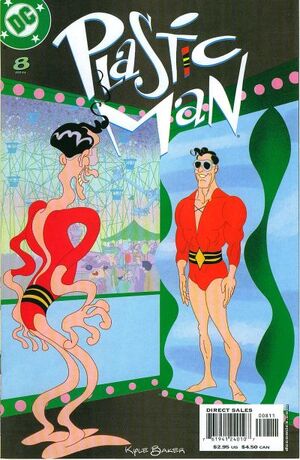 Cartoons can't be libelous, Woozy, because cartoons are clearly not real. Only an idiot would debate the plausibility of a comic book story.

Woozy Winks reads a comic book about Plastic Man, in which Plastic Man drinks. After inquiring, Plastic Man explains to Woozy that he does not drink because he needs to stay in peak condition, and he is simply reading a comic book, which is fiction. Plas then prepares dinner for himself, Woozy, and Agent Morgan. They are about to eat when the doorbell rings. A foot swiftly kicks Plastic Man which is owned by none other than a lady claiming to be Plastic Man's wife - Angel O'Brian!

A screaming child soon enters, begging "Daddy" to come home. Agent Morgan is furious to find out that Plas is married with a child, but Plas denies it. However, the child being made out of rubber would seem to indicate that Plas is the father... Agent Morgan and Angel begin fighting and the flaming shish-kabobs that Plas prepared for dinner start a fire. Morgan knocks out Angel and brings Luke out of the fire when, suddenly, the Time Trapper appears and snatches Angel O'Brian, leaving Abraham Lincoln behind!

With some fast thinking, Plas manages to put out the fire. He and Woozy quickly recognize the man the Time Trapper left behind and realize that they need to mask him from "the future." Agent Morgan and Luke, realizing the fire is out, return to the apartment, wondering where "Mom" is. Plas (and Woozy) reveal that the Time Trapper took her.

Deciding that they could use some help, the five of them teleport to the Justice League Watchtower. Once there, Woozy looks at pictures from the annual JLA company picnic and notices that things are screwy - Batman does not age in 15 years of pictures and Martian Manhunter beats the Flash in a sack race. Clearly, the Time Trapper has altered the continuity of the universe!

The heroes surmise that Abraham Lincoln being in the present may have something to do with it, while the President grabs Wonder Woman's bottom. In this newly altered timeline, Wonder Woman doesn't seem to mind, but Agent Morgan is offended. She kicks Abraham Lincoln in the face, knocking off a disguise, and revealing that the President is actually John Wilkes Booth. They quickly capture Booth but soon realize that in order to save the timeline, they need to make sure that President Lincoln dies!

Retrieved from "https://heykidscomics.fandom.com/wiki/Plastic_Man_Vol_4_8?oldid=1445581"
Community content is available under CC-BY-SA unless otherwise noted.