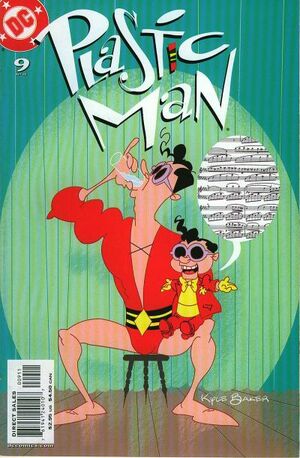 Luke! I am not your father! Don't make me use force!

Plastic Man, Woozy Winks, Agent Morgan, and John Wilkes Booth borrow a Time Sphere from Superboy to head into the past to kill Abraham Lincoln. They have a few problems operating the Time Sphere and bounce around time a bit, before landing in 1865.

Plastic Man unties Booth and sets him to execute the President, but Booth makes a run for it instead. Unfortunately, Booth gets trampled by a horse and dies. Plas and Woozy realize that it is now up to them to kill Lincoln. The two head to Ford's Theater. They have some difficulty getting in, but cleverly disguised as a piano, they manage.

Plastic Man is set to do the dead when the Time Trapper returns, along with his captive - Angel O'Brian. Plas passes the gun off to Woozy, informing Woozy that he will need to kill Lincoln while Plas deals with the Time Trapper. Woozy, however, misses, and is socked in the face by the President. The Time Trapper makes for his escape when Agent Morgan arrives, just in time to stop him and shoot the president.

They return to the present to discover, in a shocking and bizarre turn of events, that Luke O'Brian is actually Martian Manhunter, Time Trapper is actually Metron, and Angel is actually Poison Ivy who was controlling the other two in a bizarre revenge plot against Plastic Man and agribusiness.

Retrieved from "https://heykidscomics.fandom.com/wiki/Plastic_Man_Vol_4_9?oldid=1445582"
Community content is available under CC-BY-SA unless otherwise noted.