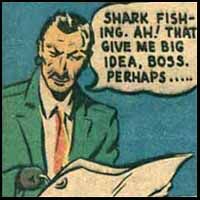 Portygee the Hooker was a smuggler of Chinese slaves into San Francisco, California. He sometimes hid his victims inside the carcasses of sharks in order to fool the port authorities. Portygee worked with the Police Commissioner to cover up his activities, but they were both eventually discovered and defeated by the international detective, Fu Chang.

Retrieved from "https://heykidscomics.fandom.com/wiki/Portygee_(Earth-MLJ)?oldid=1581674"
Community content is available under CC-BY-SA unless otherwise noted.