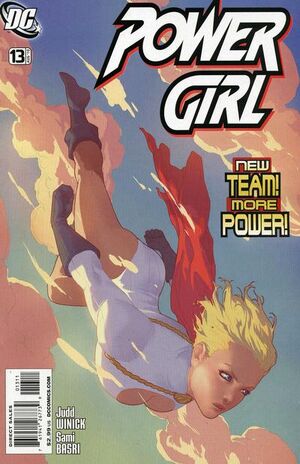 Appearing in "What a Difference a Day makes!"Edit

Synopsis for "What a Difference a Day makes!"Edit

Power Girl starts another busy day as Karen Starr, CEO of Starrware Industries. Nicco Cho, a nanotech researcher, presents her with a pair of earrings with a communicator built-in. He asks her to field test them in preparation for mass-production. Her executive assistant, Simon Peters, bursts into her office to inform her that the bank will be sending four executive finance officers that afternoon, and he has been unable to get in touch with Starrware's head of finance, Donna Anderson. At the same time, Karen receives a call on her private line from Mr. Terrific, who tells her that Superman has convened a joint meeting of the JLA and JSA.

When Power Girl arrives at the meeting, Superman informs the gathered heroes that Max Lord has returned from the dead, and orders a worldwide manhunt. Power Girl joins several JSA members investigating a lead at the decommissioned Justice League International embassy in Moscow. As they are planning a stealth infiltration of the facility, Booster Gold arrives with guns blazing. Power Girl confronts Booster, angry at him for blowing their cover despite his good intentions.

She flies off to an abandoned munitions factory in northern China to follow up another lead, where she uncovers a dozen reactivated OMACs. While she is battling them, Max Lord is at the JLI embassy in New York City, broadcasting a telepathic message worldwide that causes him to be erased from nearly everyone's memory.

Power Girl, with no recollection of the day's events, returns to her apartment. She is frantically contacted by Simon, who reminds her of the meeting with the bank executives and informs her that Donna has apparently embezzled all of Starrware Industries funds and disappeared.

Retrieved from "https://heykidscomics.fandom.com/wiki/Power_Girl_Vol_2_13?oldid=1455545"
Community content is available under CC-BY-SA unless otherwise noted.