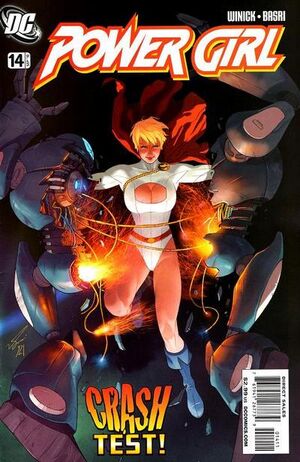 "Trouble at work"? If I hear one more moron in a fancy suit underplay how much my life is going down the toilet, I'm gonna make their rib cage into a hat.

Starrware Industries is facing bankruptcy after CFO Donna Anderson runs off with all their money. Furthermore, all their equipment and experiments are being seized by First Federal Savings and Loan as collateral against their debt. While dealing with the bank officers, Karen Starr is contacted by Booster Gold, who says he needs to talk to her.

Meanwhile, down on the docks, a business transaction is under way between Randall Mikavic, the fourth richest arms dealer in the world, and Benjamin Vitale, the sixth richest. Mikavic is purchasing what he believes is a bomb capable of leveling an entire city without leaving any fallout. The bomb casing opens up to reveal a single android. The android states that its programming is incomplete, and kills Mikavic in order to copy his neural pathways. Vitale and the others flee the scene.

Power Girl meets with Booster Gold, who attempts to convince her that Max Lord is on the loose. Power Girl, whose memory has been wiped by Lord, believes Booster is delusional and expresses concerns about his sanity.

As Power Girl is returning to manage the crisis at Starrware, she notices several destroyed warehouses on the docks. When she goes to investigate, she discovers Crash, the android from before who has assimilated Mikavic's personality. Mikavic explains that, although he doesn't understand what is going on, he is being forced to destroy his surroundings by the android's programming.

As Power Girl attempts to incapacitate Crash, Mikavic is able to access the full programming, which causes him to bulk up significantly and increases his strength to a level on par with Power Girl. He also reveals that he now understands his primary objective: destroy New York City!

Retrieved from "https://heykidscomics.fandom.com/wiki/Power_Girl_Vol_2_14?oldid=1455546"
Community content is available under CC-BY-SA unless otherwise noted.