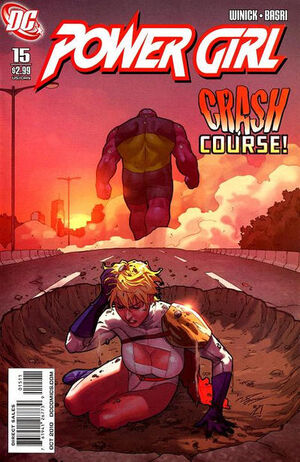 I'm the man in charge. I'm Max. And we've both had a good day at work.

Randall Mikavic has fully embraced his new-found powers as the android Crash. He is apparently capable of holding his own against Power Girl, who is trying to stop him from completing his objective of destroying New York City.

Power Girl calls Nicco Cho with the communicator earrings he designed for her. Posing as her alter-ego Karen Starr, she reveals that she knows about his criminal history and threatens to "out" him if he doesn't help her friend, Power Girl, discover Crash's weakness. To aid his research, she forcibly delivers the capsule the android came in to her office at Starrware Industries.

Cho reluctantly hacks into a military database while Power Girl and Crash continue their battle on the waterfront. Cho discovers that the android's programming is only active for a four hour period; all Power Girl has to do is keep him occupied and he will eventually shut down.

After Crash powers down, Power Girl prepares to deliver him to S.T.A.R. Labs. Before she can do so, a portal opens up and she is incapacitated by kryptonite. A man steps through the portal and congratulates Crash on completing his cellular replication. He announces his name is Max and that he is the one in charge. Max and Crash step through the portal and disappear.

Back at Starrware, Power Girl (as Karen Starr) is on the phone with Mr Terrific, filling him in on the mysterious Max. She is interrupted by an angry Nicco Cho, who claims to know about her secret identity.

Retrieved from "https://heykidscomics.fandom.com/wiki/Power_Girl_Vol_2_15?oldid=1737762"
Community content is available under CC-BY-SA unless otherwise noted.