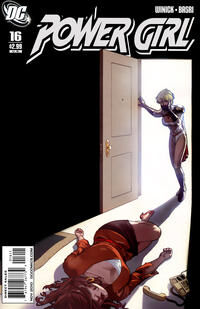 Donna didn't do this. And Nicholas is right. I've dragged regular people into my mess.

Power Girl is fighting a masked assailant in an unspecified icy climate. Although the two are evenly matched, she is able to unmask her opponent and is visibly surprised by what she discovers.

Flashback to several days earlier. Nicholas Cho confronts Karen Starr in her office, insisting he knows she is Power Girl. She attempts to laugh him off, but he pulls what appears to be a gun on her, forcing her to reveal herself. The "gun" turns out to be a specialized vacuum cleaner used on sensitive lab equipment. Cho insists he is fully reformed from his criminal past, and resents the way Power Girl bullied him into helping her against Crash. He quits the company in disgust.

Dick Grayson helps Power Girl track the money stolen by Donna Anderson, tracing it through several shell companies before uncovering the purchase of a large thermal generator designed for Arctic use. He also discovers surveillance footage of Donna boarding a flight to Thailand. Power Girl travels to Thailand and finds Donna dead of an apparent heroin overdose.

Realizing that Donna's behavior and death don't add up, Power Girl offers a sincere apology to Nicco and asks for help uncovering the truth. As a peace offering, she shows him a command post/laboratory designed by Batman. Cho agrees to assist her.

Retrieved from "https://heykidscomics.fandom.com/wiki/Power_Girl_Vol_2_16?oldid=1504858"
Community content is available under CC-BY-SA unless otherwise noted.