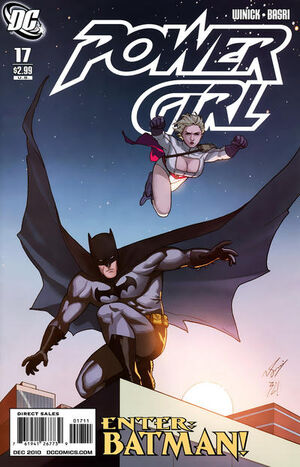 Power Girl and Batman, investigating who is behind Starrware Industries financial woes, disable a group of well-armed mercenaries as Nicco Cho questions the legality of it all via commlink. After dealing with the bodyguards, Power Girl and Batman interrogate Benjamin Vitale, the arms dealer whol sold the C.R.A.S.H. android to Randall Mikavic. Vitale informs them that the android was sent to Antarctica for a week before the sale. Batman cautions Power Girl against trusting Cho too much, and complains that he's "chatty."

Power Girl travels to Antarctica and identifies a hidden facility by the heat signature from the thermal generators purchased by Donna Anderson. Before she can investigate further, she is attacked by a masked assailant. Nicco, from his command post in NYC, is able to observe the fight and scan the assailant through Power Girl's communicator earrings. He comes to a startling conclusion that's confirmed when Power Girl manages to unmask her opponent. She has been fighting a clone...of herself!

Retrieved from "https://heykidscomics.fandom.com/wiki/Power_Girl_Vol_2_17?oldid=1455549"
Community content is available under CC-BY-SA unless otherwise noted.