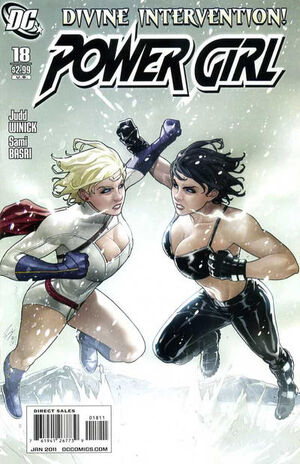 I remember. I know who wrecked my company. I know who murdered Donna. I know who's hiden from the entire world. His name is Max Lord. AND I REMEMBER.

Above a secret Antarctic research facility, Power Girl unmasks a black-haired clone of herself. A flashback reveals that Max Lord hired Dr Sivana to create the clone, which he names Divine. She is a successful copy, with all the same powers as a real Kryptonian, as Power Girl discovers first-hand during their battle. Eventually the fighting moves into the facility where Power Girl discovers an entire wing of incubating clones, including another of herself. Divine states she has no idea what the greater agenda is as she "just hopped out of the oven."

As the two continue fighting, they are both disabled by a high-intensity blast of red solar radiation fired by Max Lord. Lord sends his henchman Crash into the radiation blast to rescue Divine, and gleefully pronounces that everything is going according to plan. The three teleport away and the facilities self-destruct mechanism is activated.

Power Girl sees a sign for Kord Industries in the facility and, either from the stress of the situation or the red solar radiation's effects, is able to overcome the mental block installed by Lord. Memories of Ted Kord's murder and Lord's villainous behavior come flooding back. Although she is caught in the self-destruct explosion, she emerges from the crater with her memories intact.

Retrieved from "https://heykidscomics.fandom.com/wiki/Power_Girl_Vol_2_18?oldid=1504861"
Community content is available under CC-BY-SA unless otherwise noted.