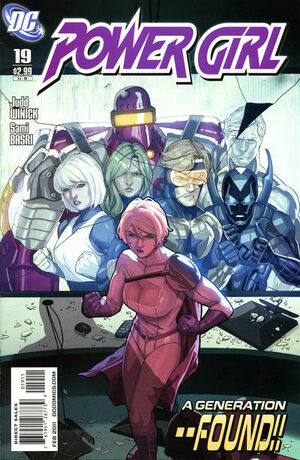 It's just smoke and mirrors, Kara.

Power Girl, with her newly restored memories of Max Lord, reminisces about her good ol' days in the Justice League International, particularly one humorous encounter with the Royal Flush Gang.

Back in the present day, she convenes a meeting of the JSA All-Stars to convince them of Lord's existence. Although their mental block is still in place, they are suspicious enough that they agree to sound the alarm. However, as soon as they jump to action the mental block reasserts itself and wipes all memory of Lord from their minds again. They conclude the meeting without taking any action.

Power Girl has a nightmare in which she is haunted by her repressed memories. She sees Divine kill Nicco Cho in the same way Wonder Woman originally killed Max Lord, and she herself is then shot by Lord the same way he murdered Ted Kord.

When she wakes up, Cho informs her that he was able to track Divine and Crash to Vietnam through one of Power Girl's nanotech earrings, which came loose in the fight. Power Girl travels to Vietnam where she uncovers another hidden research facility by overpowering its cloaking device with her freezing breath. Professor Ivo appears, and admits that he didn't consider guarding against that. He welcomes Power Girl to the newly revitalized Project Cadmus, and introduces her to a host of vicious monsters he has created.

Retrieved from "https://heykidscomics.fandom.com/wiki/Power_Girl_Vol_2_19?oldid=1737783"
Community content is available under CC-BY-SA unless otherwise noted.