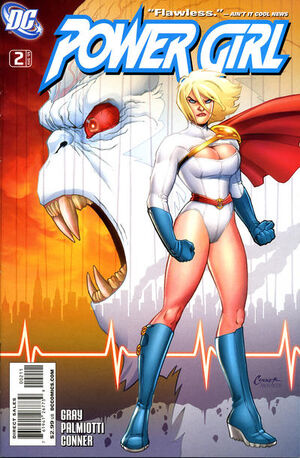 Great, the villainous monologue from crazy guy... I mean crazy monkey guy. It's worse than sharks with laser beams on their heads.

Appearing in "Unleashing the Beast"Edit

Synopsis for "Unleashing the Beast"Edit

The Ultra-Humanite has Power Girl captive aboard his ship. He admits that the hijacking of Manhattan was executed merely to bring her out into the open so he could capture her. His intent is to transplant his brain into her body. Power Girl mocks the Humanite's current appearance which is that of a white super-ape. The Ultra-Humanite becomes easily agitated with her and tells her his back story.

The Ultra-Humanite was once a sickly child named Gerard Shugel. Though cursed with a failing body, his mind was brilliant and he eventually grew up to become a respected research scientist. His colleagues however, did not approve of Gerard's methods, particularly his numerous experiments involving animals. The only one who stood by his side was a woman named Satana. Gerard was eventually let go and Satana and he traveled to Africa to continue their experiments. He eventually perfected the process by which to conduct a successful brain transplant and Satana moved Gerard's brain from his meak body into that of a massive, white gorilla. Satana assured him that the surrogate body was only temporary, but Gerard relished the feeling of the power that was now available to him.

While the Humanite prepares Power Girl for the transplant, members of the Justice Society of America work in the city, desperately trying to keep the panicking citizens from tearing New York apart.

Retrieved from "https://heykidscomics.fandom.com/wiki/Power_Girl_Vol_2_2?oldid=1455532"
Community content is available under CC-BY-SA unless otherwise noted.