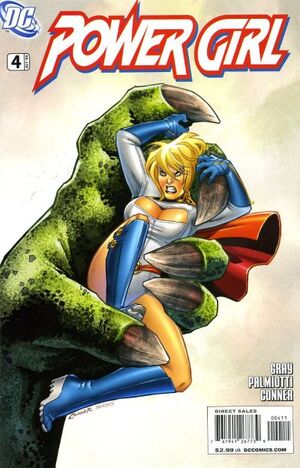 Way too much woman for you?

Power Girl and Terra enjoy a night out at the movies. Terra says she thinking of adopting an Australian accent so that she can tell people she's from "down under." Meanwhile, a woman claiming to be Zoraida the Elf Queen is wreaking havoc on the Brooklyn Bridge at the head of an army of goblins, ogres, and trolls. As our heroines make their way to the scene, Power Girl mentors Terra on the finer points of being a superhero, such as always having your costume handy and the importance of crowd control.

After an extended battle sequence involving a manga-style tentacle monster, Power Girl is able to close the lock on Zoraida's magic spell book. Instantly the summoned monsters disappear. The "elf queen" turns out to be an overzealous tree-hugger who wanted to return Manhattan to a state of nature. Terra, whose own powers are intimately tied to the earth, argues that her heart is in the right place, and Power Girl offers to set her up with an internship at a progressive non-profit organization where her enthusiasm can be put to good use.

At Starrware Industries the next day, Dexter Nichols asks Karen Starr if she's aware that some of the nanotech grey goo has gone missing from the lab. Karen tells him she lent it to her "friend" Power Girl, which impresses Dexter. He informs her that his work on a life-extending serum is progressing. She returns to her office and discusses business with her assistant, Simon Peters. Amongst other things, they discuss the need to hire a public relations executive.

Karen receives a call from her real estate agent, who has found her an apartment in the Park Slope neighborhood of Brooklyn. She goes to check it out, and happily signs the lease. Just as everything is looking up, a mysterious object crashes in Prospect Park, and Power Girl is back on duty.

Retrieved from "https://heykidscomics.fandom.com/wiki/Power_Girl_Vol_2_4?oldid=1455536"
Community content is available under CC-BY-SA unless otherwise noted.