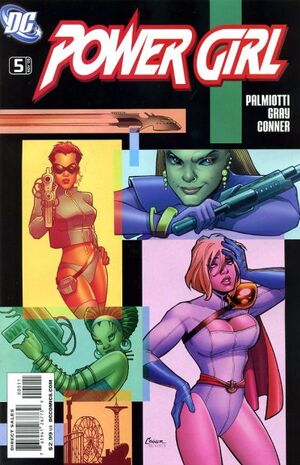 "Usually it's impossible to catch a cab this time of day..."

Power Girl's cat was portrayed as grey in the first four issues of Power Girl Vol 2, while historically portrayed as yellow or orange. In this issue it is revealed that the cat had been using a supply of graphite powder as a litter box and that the grey colour is simply a thick cover of dust. After a thorough scrubbing it's once again orange. This story is explained throughout issues 1-4 through very subtle hints in the background imagery.

Retrieved from "https://heykidscomics.fandom.com/wiki/Power_Girl_Vol_2_5?oldid=1455537"
Community content is available under CC-BY-SA unless otherwise noted.