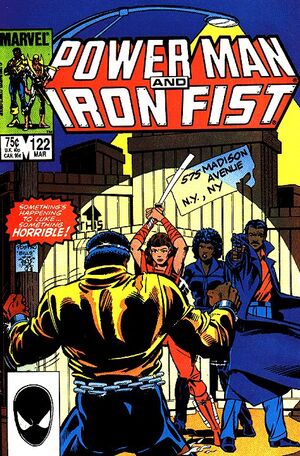 Misty's feelings about Danny become bitterly entangled in an emotional web that threatens to ruin her life! Meanwhile, Power Man and Iron Fist find themselves in the ultimate peril when they confront the brother of the Dragon King in "What's Eating Misty?"

There is much confusion in this issue for the average reader:

Iron Fist and King's dupicity is not revealed completely until Namor #25.

Retrieved from "https://heykidscomics.fandom.com/wiki/Power_Man_and_Iron_Fist_Vol_1_122?oldid=1652610"
Community content is available under CC-BY-SA unless otherwise noted.