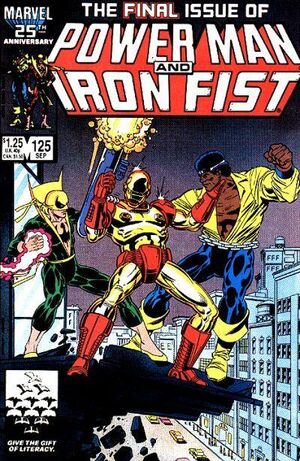 It's the end of the road for the Heroes for Hire and crazy John Lumas wants to make sure they go out with a bang. And can it be...Luke Cage is accused of the murder of Danny Rand. Plus, Twelve year old Bobby Wright's (Captain Hero) condition gets steadily worse. Can the chi of Iron Fist save the boy? In this issue witness the tragic death of two heroes. All this plus Power Man and Iron Fist take on the 1985 Super Bowl Champion the Chicago Bears in a football game.

Retrieved from "https://heykidscomics.fandom.com/wiki/Power_Man_and_Iron_Fist_Vol_1_125?oldid=1756569"
Community content is available under CC-BY-SA unless otherwise noted.