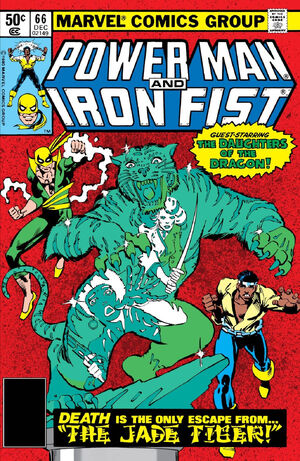 Appearing in "The Jade Tiger!"Edit

Synopsis for "The Jade Tiger!"Edit

Misty Knight and Colleen Wing have been hired to steal back the Jade Tiger, which has been stolen by a group of thieves led by Sabretooth and Constrictor. When the girls are confronted by the two super-beings, Misty's cyborg arm is caught in the vaults magnetic locked and sealed inside and Colleen is seriously wounded by Sabretooth, but manages to escape.

While Power Man reconciles with Harmony Young, Iron Fist is busy training with Bob Diamond. The two are interrupted when the wounded Colleen bursts in and tells Danny and Bob what happened. Danny goes along with Power Man to go and rescue Misty from the vault. This brings them into conflict with Constrictor and Sabretooth.

The two heroes manage to rescue Misty, defeat the two super-villains and recover the Jade Dragon. After the battle is over the four adventurers decide to celebrate with pizza.

Retrieved from "https://heykidscomics.fandom.com/wiki/Power_Man_and_Iron_Fist_Vol_1_66?oldid=1451554"
Community content is available under CC-BY-SA unless otherwise noted.