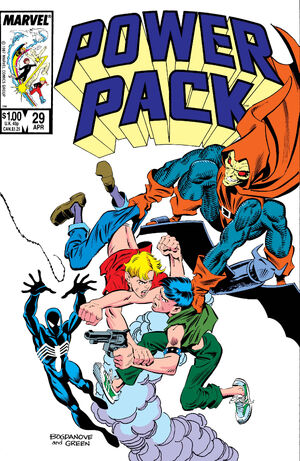 Alex Power has a rough day as he deals with the likes of Spider-Man and the Hobgoblin!

Due to the Hobgoblin brainwashing Ned Leeds and using him as a stand-in during this time period, it can be difficult to determine exactly which appearances are the true Hobgoblin and which are Leeds. Listing this appearance as Kingsley is an educated guess.

Retrieved from "https://heykidscomics.fandom.com/wiki/Power_Pack_Vol_1_29?oldid=1450902"
Community content is available under CC-BY-SA unless otherwise noted.