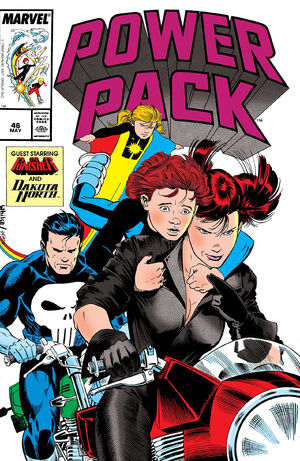 One evening, Katie is watching the Goo-Gam TV series in the company of her disgruntled brothers Alex and Jack (because Jack has caught the flu and infected Alex with it), when suddenly a news bulletin interrupts the program: Jessie Wilcox Jones, the creator of the popular Goo-Gam children books series, has been accused of having embezzled the $100,000 prize money which was used to promote the book series and over which Jones had also met and befriended Katie and Jack. Outraged, Katie intends to aid Jones in clearing her name, and receiving no moral support from her brothers, she storms off on her own. But as soon as she is gone, Jack looks up the number of the sharpest private eye he can find...

Using a calling card from an earlier encounter, Katie contacts the Punisher and enlists his assistance, while Jack hires the female PE Dakota North (on whom he forms an instant crush) for the job. Getting to the thugs Larry and Moe who were foiled by Jack and Katie in their attempt to steal the Goo-Gam prize money for themselves some time back, they learn from a slip-up by Larry that Moe's brother, one Jerome Horwitz, a former employee at the Goo-Gam series' publishing company, may have his hands in the theft. They track down his and Moe's other brother, Samuel, to a seedy bar, where they run into Katie and the Punisher whose own investigation has also brought them here. After interrupting a budding bar brawl, they grab Samuel and split before his angered compatriots can take up proper pursuit.

After regrouping, the four heroes question Samuel, who willingly reveals the whole story. As it turns out, the three Horwitz brothers and Larry had originally planned to pull off the kidnapping of Ms. Jones together, only that Jerome got out just beforehand, saying that he has found himself a new (and apparently very lucrative) job, and Samuel was in the end abandoned by Moe and Larry, who pulled off their scheme on their own and, as we know, failed. After being supplied with Jerome's address, the quartett proceeds to Jerome's villa, where Dakota and the Punisher attempt to pass themselves off as associates of Moses and Larry: Dakota as Moe's girlfriend, and Punisher as a hitman who attempts to force Jerome to confess his crimes to the police. However, while Jerome does admit that he stole the money just before it was buried for the Goo-Gam treasure hunt, he keeps his cool and manages to baffle both his confronters into leaving his grounds.

After this foiled attempt, Katie and Jack decide to take matters into their own hands and drop by at Ms. Jones' to get some much-needed paraphernalia. The same night, Jerome wants to take a dip in his indoor pool when he suddenly finds himself swamped with Goo-Gam dolls. Following that, he becomes easy prey for Katie and Jack, who - once again dressed in Goo-Gam costumes - "play" a little with him, finally frightening him out of his wits so that he is ready to confess his fell deed. In the end, Katie sees that, with some aid from the Punisher, Jerome gets a proper punishment for his crime (i.e. a sound spanking), and when they bring back the Goo-Gam props to their owner, they find a thankful Ms. Jones, now cleared of the charges against her, waiting for them with gifts of gratitude: A kiss on the cheek for Jack, and a copy of the newest about-to-be-released adventure of the Goo-Gams featuring - as Ms. Jones had promised in their first encounter - Katie as a main character. And that night, after telling off Katie for her cheekiness on him, Jack goes on to cherish his own souvenir from this adventure: a handkerchief from Dakota, which she had given him to fight down his sniffles.

Retrieved from "https://heykidscomics.fandom.com/wiki/Power_Pack_Vol_1_46?oldid=1450920"
Community content is available under CC-BY-SA unless otherwise noted.