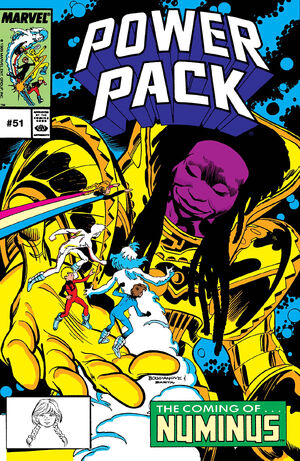 Oh, you know... we're just this bunch of gigantic, ageless characters who, for various reasons, hang out around the galaxy as the living embodiment of some abstract concept or other.

Power Pack leaves fabulous Kymellia for Earth— and runs smack dab into the awesome spirit of the universe called Numinus! Meanwhile, the former Queen Mother of the Snarks makes a murderous bid to seize Power Pack's abilities for herself!

Retrieved from "https://heykidscomics.fandom.com/wiki/Power_Pack_Vol_1_51?oldid=1450925"
Community content is available under CC-BY-SA unless otherwise noted.