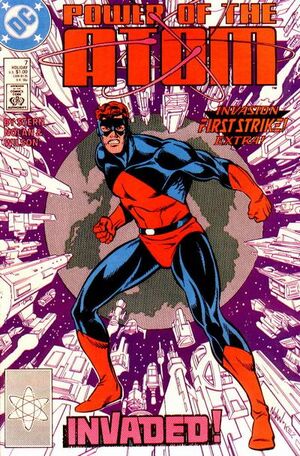 Rivalry? You've been trying to kill me for years!

Appearing in "Behind Enemy Lines"Edit

Synopsis for "Behind Enemy Lines"Edit

The Atom takes the fight right to the alien scumbags at their beachhead in Australia, during the great Invasion!. He is the first superhero to infiltrate and attack their land base, and teams up with his old enemy Chronos in an uneasy truce for the good of the planet. Jean Loring stays at home and vaguely worries.

After Chronos informs him of the crisis and proposes they join forces, the Atom rides a telephone line right into the heart of enemy territory. Using his powers in direct physical combat, he swathes through Khunds and Citadel to determine the situation and liberate any prisoners of war in his path. He sneaks into a large internment camp, defeats the occupying forces settled there, and frees the captured humans. Although regretful that it has come to this, Ray guns down enemy soldiers without hesitation using laser beams taken from the other side. At the last moment, Chronos saves him from being shot in the back. They win, but not without casualties. War is most definitely hell.

Retrieved from "https://heykidscomics.fandom.com/wiki/Power_of_the_Atom_Vol_1_7?oldid=1507305"
Community content is available under CC-BY-SA unless otherwise noted.