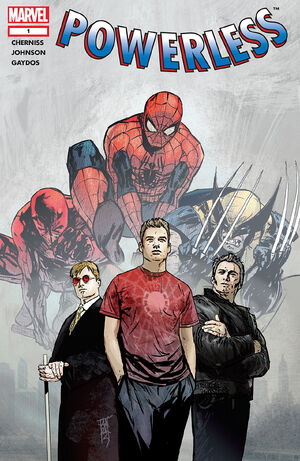 A bald-headed middle-aged man awakes with a gasp in a hospital. He was found on the pavement in front of his home in a coma but there's nothing discernibly wrong with him. The doctor seeing him is S.Richards and her husband, also a doctor is also called Richards. She tells him he'll be back to his regular life in no time. He wonders what that is.

Mr Watts is a psychiatrist and in the next panels is listening to a patient called Emma complaining that she can't believe Scott turned her down for that 'skank' Jean. As she leaves, he looks at his schedule and the next patient is called 'Parker'.

Peter Parker was bitten on his arm by a spider. The bite has made his arm wither and effectively die. His aunt has paid for him to see a psychiatrist to deal with his depression from that, the death of his parents and the recent murder of his uncle. Watts thinks he's heard a story similar to this before and has a strange vision (in his head) of Spider-Man.

After Pete's appointment is over, Watts' 3pm (Charles X) fails to show. Watts' next order of business is to meet Matt Murdock at the courthouse.

Outside and Pete is being bullied by Flash and some other guys. Gwen helps him out and tells Flash where to go. Harry comes along and says that his father wants to meet them both and see how Peter's internship at Stark Industries is going. Pete turns the offer down and later tells Gwen he's got a bad feeling about Harry's dad, Norman. He says that Norman keeps asking him questions about his internship and his 'sixth sense' is warning him of trouble.

At the courthouse, Murdock is defending Frank Castle. His family had been killed six months back by Leland Owlsley. Castle saw the whole thing but by the time he'd caught up with Owlsley, someone else had killed him (this is according to the defence, Castle is being tried FOR his murder). On the way out of the court, the blind Murdock trips and is told to watch his step by a huge man, named Fisk.

Outside, Murdock asks Watts to help him. Castle had confessed to murder after 36 hours of interrogation but Murdock wants Watts to stand as an expert witness to say that Castle was psychologically unstable at the time. Watts declines the chance.

At the Parker's, Norman Osborn arrives at their front door.

At Watts', he is woken up by Murdock calling and again asking for his help. He hangs up but there is someone in his house – someone who is wearing claws attached to some sort of metal glove…

Retrieved from "https://heykidscomics.fandom.com/wiki/Powerless_Vol_1_1?oldid=1451655"
Community content is available under CC-BY-SA unless otherwise noted.