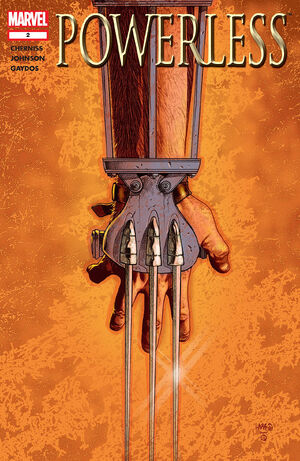 Logan, with his claws to Watts' throat, asks him about Charles Xavier. Watts tells him he was just a patient of his. Logan tells Watts Charles is dead. Logan tells Watts that it's his (Logan's) blood on Charles but he doesn't remember doing it – he doesn't even remember who he is. Watts says Logan can stay the night.

At Peter Parker's, Norman Osborn is there. As he's leaving, Norman gets Peter to walk him to his car. He tells Pete he's watching him and that he wants him to get him information from Stark for him.

Karen Page calls Matt Murdock, as she is talking to his answer machine, she describes how she's using again and is in with a bad crowd. She is stabbed.

At the prison, Murdock is talking to Frank Castle. Frank won't talk about what made him confess. He adds that there's a lot of Kingpin's men in the prison. Later, Murdock is boxing with his law partner. His partner warns him not to go after Kingpin.

At a psychiatric ward in a Manhattan hospital, Watts is seeing Bruce Banner. Banner is struggling with 'another side' to his personality. While they're talking, Banner gets angry and throws a chair.

At Stark Industries, Peter is struggling with one of his experiments. He tells Curt Connors this, who involves Tony Stark. Stark takes Peter to one side and shows him the big secret that he's working on project Iron Man. Peter is working on fiber-optic web for part of the design. It is to help Stark win a military contract.

At Watts', Watts tells Logan that witnesses saw someone matching his (Logan's) description at the murder scene of Charles. Logan leaves.

In court, Murdock calls Wilson Fisk. Fisk and Owlsley used to be business partners until an acrimonious split. Murdock gives Fisk an, erm, Fisking. He says everyone knows Fisk kills people for a living.

In a bar, a woman comes up to Logan. She is Mystique and he remembers he is Weapon X. She gives him a new assignment … kill William Watts.

Retrieved from "https://heykidscomics.fandom.com/wiki/Powerless_Vol_1_2?oldid=1451656"
Community content is available under CC-BY-SA unless otherwise noted.