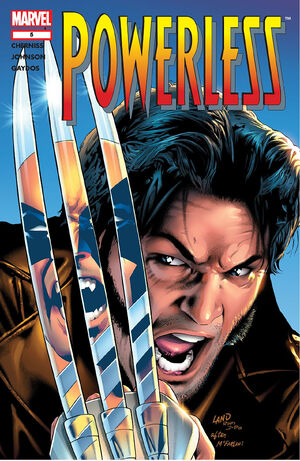 Logan has got Victor cornered somewhere in the woods. Victor speculates the reason Logan has broken his programming is because Xavier told him something about Erik's “Phoenix Agenda”, or did something else to make him appear more human. The two of them fight, Logan knocks Victor down but doesn't kill him.

At Peter's home, Captain Stacy is asking Peter about Gwen's disappearance. He says Gwen was going to meet Peter before she went missing and that he has traced a phone call from Gwen's mobile to Pete's the night before. Peter says he doesn't know anything, then goes upstairs. He has the plans from Stark and puts them in his bag before storming off.

Watts is at Murdock's apartment and tells him what Frank Castle told him about a forced confession. The next day, Murdock is back in court. He has photos taken at the police station on the day Castle confessed. The photo of policeman Craig Erwich is not Erwich at all, it is Matthew Senreich, an indirect employee of Wilson Fisk. Murdock tells the court perhaps they should call Fisk, who is at the back of the court, as a witness.

Back at Watts', Logan has returned and says he's now sure he didn't kill Xavier. He says he wants to be on his own now for Watts' own safety. They shake hands and go their own ways.

After going back to Stark, Peter calls Osborn and tells him he has what he wants. Peter then goes to Watts and tells him everything. In an excellently insightful conversation, Watts says he can't be the Adrian to Pete's Rocky who tells him it's all going to be OK and that he should go for it but that Pete must make his own decisions and take the consequences.

At Fisk Tower, Wilson tells his hitman 'Aronson' it's Murdock or him. As Murdock speaks to Frank Castle – who says how great it is he's about to be freed, four hitman stand on Murdock's balcony ready to strike.

Retrieved from "https://heykidscomics.fandom.com/wiki/Powerless_Vol_1_5?oldid=1451659"
Community content is available under CC-BY-SA unless otherwise noted.