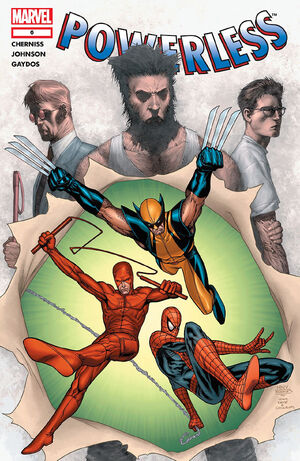 Watts is in a meeting room with Dr Bruce Banner. It is quite unproductive with neither of them communicating but then Watts begins to tell him how he woke from a coma just a few weeks ago and has since been having visions of people doing incredible things (he then pictures Banner as the Hulk). Banner's support convinces Watts to phone the police on Peter's behalf to report the kidnapping of Gwen Stacy.

Elsewhere, Matt Murdock is also on the phone to the police, reporting a murder. It is seemingly his own as he knows a hit is coming. Wilson Fisk's men storm his building and pin him to the floor. Wilson Fisk himself shows up and orders his men to leave the room. Fisk shows Matt some photos from 12 years earlier of him with Karen Page. Fisk says he knows Matt used to be a junkie and that he was the one who got Karen hooked and – ultimately – killed. He cracks Matt over the head with his cane, just as the police show up.

Peter has arrived at Oscorp with the documents Osborn got him to steal from Tony Stark. He has reached the 53rd floor and Osborn unveils Gwen. He asks for the file but then the sound of police sirens disturbs them all. Pete says he didn't call them but says he's not going to hand over the files in any case. Pete throws the papers over the window ledge. Osborn launches himself after them but tumbles over the edge, taking Gwen with him. Peter just keeps a hold of Gwen using his crippled arm and pulling her to safety. Osborn splats on the pavement below.

In the meantime, Logan is seen paying Senator Erik Magnus (a republican from New Hampshire) a visit…

Watts is writing in his journal about his experiences and concludes: “The choices you make in the lives of others connect you to their fate in a way that is deliciously human and real.”

Watts reads in the paper that Murdock has been murdered, while, on the steps of the courthouse shortly after Fisk is giving a speech through his lawyer about how great it is to be vindicated of the crime. He then tarnishes Murdock's name by revealing the embellished account of Karen Page. High above the building, Frank Castle actually commits a murder … sniping Fisk from high above. He wonders who else deserves punishment.

Back with Watts, he soliloquies about what he has learned. How life and death is real, that people choose to be heroes or villains and that, sometimes, we truly are powerless. He shaves off his moustache and in the bathroom mirror, we see his reflection as … The Watcher.

Retrieved from "https://heykidscomics.fandom.com/wiki/Powerless_Vol_1_6?oldid=1451660"
Community content is available under CC-BY-SA unless otherwise noted.