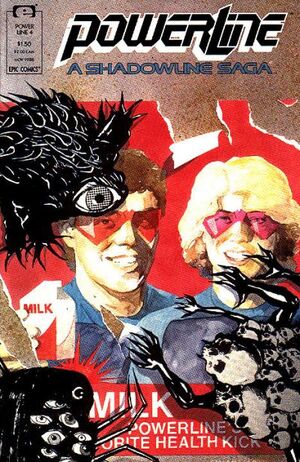 There, now, they've got the question in their eyes—Frightening. Whispering. Pulling them right to the edge -- And there—tempting, seductive -- the answer. They don't need that answer in their lives. They shouldn't have to accept it. Not now. Maybe not ever. They deserve better than a cynic's answer. A pragmatist's answer. The answer of a man who lost his innocence too many years ago... 'If we do this,' the question goes, 'how does that make us any better?' Because we will win.

Last time around, Vic and Lenore prevented a planeload of people from crashing to their deaths. But that was easy compared to facing a trio of super powered Shadow Dweller assassins!

Retrieved from "https://heykidscomics.fandom.com/wiki/Powerline_Vol_1_4?oldid=745059"
Community content is available under CC-BY-SA unless otherwise noted.