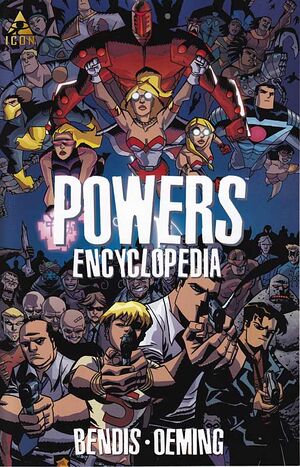 THIS IS IT: THE DEFINITIVE POWERS HANDBOOK! The most requested Powers item has finally arrived!! Heroes glide through the sky on lightning bolts and fire. Flamboyant villains attempt daring daylight robberies. God-like alien creatures clash in epic battle over the nighttime sky. And on the dirty city streets below, homicide detectives Christian Walker and Deena Pilgrim do their jobs. Now, an in-depth look at the Eisner Award-winning series in this all-new volume! Featuring bios on Christian Walker, Deena Pilgrim, Retro Girl, Captain Cross, Queen Noir, Millenium Guard and many more! Plus: all-new character artwork and cover by Powers co-creator Michael Avon Oeming! The legacy of Powers is laid out before you like never before. Including entries for characters who have yet to make their debut in the series itself.

Retrieved from "https://heykidscomics.fandom.com/wiki/Powers_Encyclopedia_Vol_1_1?oldid=1471860"
Community content is available under CC-BY-SA unless otherwise noted.