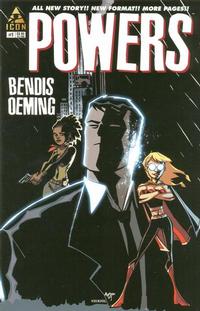 He put us together because no one else will ride with either one of us.

The copyright information on the inside front cover indicates this is Volume 3. The previous volumes were not published by Marvel Comics or any of its imprints.

Retrieved from "https://heykidscomics.fandom.com/wiki/Powers_Vol_2_1?oldid=1471867"
Community content is available under CC-BY-SA unless otherwise noted.