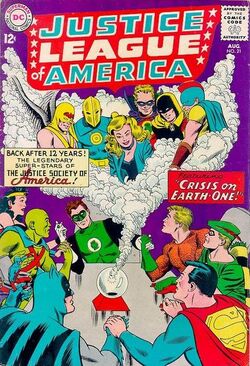 Pre-Crisis is a term used to describe characters, items, realities or events that took place during DC Comics' publishing history prior to the 1985-86 Crisis on Infinite Earths limited series. The term is used by industry professionals and consumers, and is widely considered to be an out-of-universe phrase; which is to say – characters within the DC universe continuity (with rare exception), do not use the term "Pre-Crisis" when referring to events preceding the Crisis on Infinite Earths.

The Crisis on Infinite Earths series effectively re-booted the internal DC universe from the dawn of time onward. A new history was written – one that rendered many of the older DC stories apocryphal. Characters, timelines, and events from the varying alternate realities were condensed into one modernized mainstream reality, excising many characters that would otherwise be construed as redundant.

All occurrences relating to the Golden Age or Silver Age of comic book publishing are germane to the Pre-Crisis continuity. This does not apply to stories that have been retroactively crafted to have taken place during these respective eras (ala the Silver Age comic book crossover series).

The following is a list of articles pertaining to Pre-Crisis material that is considered apocryphal, and is no longer validated in the modern continuity of DC Comics history.

There are a few characters whose existence is rooted in the Pre-Crisis alternate Earth continuity, but have survived the revisionist effects of the Crisis on Infinite Earths. See the 2006 limited series Infinite Crisis for more details.

Retrieved from "https://heykidscomics.fandom.com/wiki/Pre-Crisis?oldid=1529725"
Community content is available under CC-BY-SA unless otherwise noted.